A few months ago my book, Clean, Well-lighted Sentences, was published and I created a website to tell people something about it and to make it possible for them to contact me if they have questions related to grammar, usage, or punctuation. These are my favorite topics in life, by the way, and the only ones I know anything about. Don't ask me about two plus two -- I'm liable to answer "Five" or to begin discussing menages a trois.

People do write to me to ask about topics in my book or about issues my book doesn't mention. One fellow, for example, questioned my advice about using a gerund after the words "I'm on my way to." (A gerund is an action word ending in "ing" and doing the job of a noun. In my book I explain that "I'm on my way to" must be followed by an actual noun, like "the flower shop," or a gerund, like "buying," as in "buying flowers for you.") He wrote that "I'm on my way to doing something" sounds like "I'm in the midst of a process," whereas "I'm on my way to do something" communicates intent. He votes that each has its place and we ought not to rule out the second choice.

Thinking about English is my way of taking it easiest. It's what I most naturally do, even when I sleep. Probably this is a consequence of teaching writing for over three decades. I'm just glad I'm not an economist.

The question bugging me lately is why so many professional writers and speakers are using "If I was" or "As if it was" when they should be using "If I were" or "As if it were." This is a matter of choosing the correct verb form to indicate that what you're speculating about is contrary to fact. "Were" is the right choice, as in "If I were you" or "As if it were free." Yet not only teenagers on the bus but professionals in respected media are making the mistake of using "was" in this context. Take a look at some evidence:

"Extremist ideas from Pakistan would not take root in Britain if the ground there was not fertile."
-- from an article in Time magazine, "Such Lovely Lads," August 21, 2006

"...the real sense of achievement comes from celebrating each and every breath as if it was a shot glass of molten meaning..."
-- from an article in the San Francisco Chronicle, "Carpe diem, y'all! Old age is inexorably creeping up," February 8, 2008

"Wouldn't it be reassuring if it [money] was more like a physical thing, and less like an idea?"
-- from a book review in The New Yorker, "Heroes and Zeroes," February 2, 2009

In the case of Andy Rooney, I can say that he's deliberately breaking the rule because he wants to sound like an ordinary guy (to enhance his appeal), and ordinary guys these days don't say "If I were rich" or "If I were anything," for that matter.

In the case of Time magazine or the San Francisco Chronicle, I can say that every writer overlooks something from time to time, although the error really should be obvious to copy editors.

In the case of The New Yorker, however, I can't say anything except "What?" I'm astounded. The New Yorker gives us the best writing in this country, week after week, and makes me happy to be alive every time I read through an issue. How can a book reviewer in this guardian of our language write "if [money] was more like a physical thing" when he means that it isn't?

In my lifetime no grammar rule has changed. Our usage of English has relaxed, to be polite about it, but no rule has changed. Even "whom" is still with us, and professional writers and editors are taking great pains to keep it there. So what's going on with subjunctive mood (that's what "were" is called inside sentences that speculate about what would be, if things were different)?

Surely, this isn't the most disturbing question facing Americans right now. But given what's happening around the world and within our nation at the moment, I find it relieving to focus on English.

How about you? Is there something related to writing you'd like to ask about or give an opinion on? (Like "How could she end that sentence in a preposition?" Or "Is it okay to write a fragment, as she just did?")

I'd love to hear from you.
Posted by Janis Bell at 4:41 PM 1 comment: Links to this post

Another recommendation from our Adult Fairy Tales display: A Sportman's Notebook, by Ivan Turgenev. Sherwood Anderson once called A Sportsman's Notebook "the sweetest thing in all literature."

The narrator of “Bezhin Meadow,” my favorite story in this collection, is a lost hunter, traveling in the Russian countryside. Turgenev incorporates long descriptions of nature and folk legends to create the foreboding mood and foreshadow Pavlusha’s fate (one of the village boys).

The story begins with a lyrical description of a beautiful summer day, of the landscape enveloped in lilac mist, where towards evening “ a scarlet radiance lingers for a short time over the darkened earth and, flickering softly, like a candle that is carried with great care, the evening star twinkles faintly in the sky." The hunter looks for a way out of this enchanted place, while a quail cries and a small night bird “shied away in alarm.” The sensation created here is of desolation and loneliness of a man against vast nature, a sensation similar to Chekhovian view of nature insensitive to human suffering. As if bewitched by the beauty of this fairyland, the hunter finds himself in a low-lying hollow that resembles a cauldron. He keeps walking until he comes to the edge of “a terrible precipice.”

Right below, the hunter sees campfire by the river and five peasant boys sitting around it. As he lies down to rest and pretends to be asleep, the boys begin to talk openly. The narrator singles out Pavlusha, “He was an uncouth lad, there is no denying it, and yet I liked him for all that: he had an intelligent, frank look, and in his voice too there was a note of authority."

The night is long and the boys tell eleven local folktales populated with different mythical deities. The unifying theme of all the stories is death. A goblin lives in the old paper-mil and walks about at night. Gavrilo, the village carpenter, after getting lost one night in the woods, encounters a water nymph, sitting on a branch and beckoning to him. Old Yermil crosses the haunted dam where the grave of a drowned man lies. One night Yermil sees a white lamb on the man’s grave and takes the pretty lamb with him on his horse, only to find out that the lamb is not as innocent as it appears! In another legend the ghost of a dead master walks about looking for a magic herb for his grave that presses too heavily on him. Ulyana, a woman from their village, envisions her own death after a white dove appears out of nowhere, the symbol of the lost dead soul. Pavlusha goes to the river to fetch water and upon returning, tells the boys he heard drowned boy Vassily’s voice calling him from under the water to join him.

Each folktale is just another take on a sudden, violent death. By telling the stories of goblins, water nymphs, evil water spirits and lamenting souls, Turgenev foreshadows the inevitability of Pavlusha's fate and human mortality.

I read somewhere that this was Hemingway's favorite book which he had read over and over again.
Posted by Aggie at 11:22 PM No comments: Links to this post 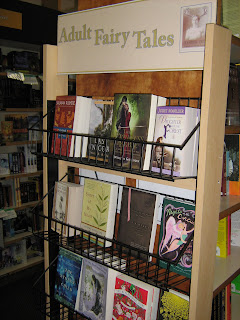 Check out Kepler's new display Adult Fairy Tales and pick up one of my favorites:

The Djinn in the Nightingale's Eye: Five Fairy Stories, by Byatt, A.S.

The first time I read "Dragons' Breath" I was instantly reminded of the war in Sarajevo. Byatt writes about a village in a valley surrounded by mountains, which is slowly being devoured by gigantic "worms" (the old English name for dragons). The war snuck up on Sarajevo, a city in a valley surrounded by the mountains, just like the worms in this story. In Sarajevo, the people deceived themselves with false hope, and as a result the war, although inevitable, came as a surprise to them. In Byatt's story, it is the characters' boredom with their peaceful, monotonous existence that leads to the destruction of their old lives. Using the simple fairy tale form, Byatt tell the tales within the tales. They are at least three stories behind the plot of "Dragons' Breath": the worm like dragons destroy the village, the extended metaphor of war and its devastation, and the celebration and salvation in storytelling.

Catherine Brady writes about the transformative power of the story: "Though suspense is a necessary part of the fun, a story satisfies not because it pursues a literal chain of events but because it manages to make those events stand for something else, a something else that eludes the reader, yet compels response."

At the end of "Dragons' Breath" Byatt reveals the real hero: the imagination and the storytelling defeats the boredom. The tale of fear and loss becomes the tale of rediscovery and wonder. Only later did I found out that Byatt actually wrote "Dragons' Breath" for a radio program which was organized to aid Sarajevo.

Posted by Aggie at 11:17 PM No comments: Links to this post

Labels: A. S., by Byatt, The Djinn in the Nightingale's Eye

Dear Writers,
We are starting of January with a special author event, followed by our monthly in-store writing workshop meeting.
Janice Bell, local teacher, writing coach and author of "Clean, Well-Lighted Sentences: A Writer's Guide to Avoiding the Most Common Errors in Grammar and Punctuation," offers a free workshop on January 25th, 2009 at 2 p.m.
Our regular workshop will take place from 4-6 p.m. (right after Janice Bell presentation and book signing).  We will discuss three manuscripts (two spots are already reserved). Please e-mail me as usual at aggie@keplers.com to confirm your attendance and I'll forward you the works. As always, e-mail me, if you have any questions.

http://janisbell.com/Clean,_Well-Lighted_Sentences.html
Posted by Aggie at 6:09 PM No comments: Links to this post 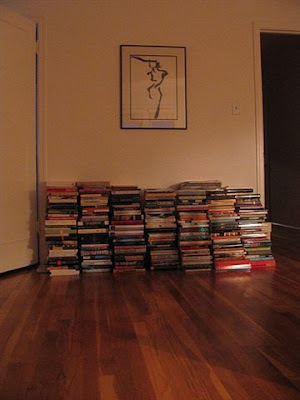 Posted by Aggie at 12:05 AM No comments: Links to this post 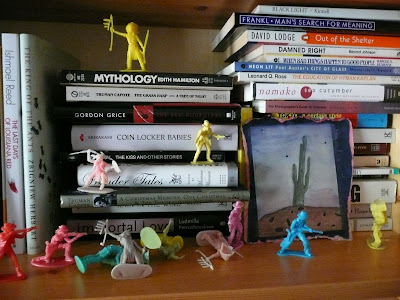 The skirmish continues…
Posted by Aggie at 10:55 AM No comments: Links to this post 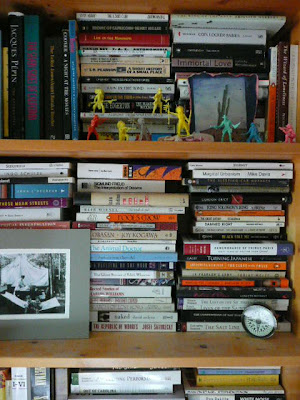 Here is the first installment of our new recurring feature entitled Bookshelf After Bookshelf.
Thanks to Marilyn Smith for sharing! If your bookshelf has a story to tell, e-mail me at aggie@wellreaddonkey.com
Posted by Aggie at 10:44 PM No comments: Links to this post