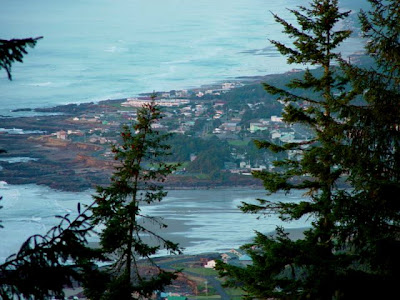 I live in a small, steep village on the coast of Oregon. There is more light here than in anyplace I’ve ever lived. It courses among clouds or falls unimpeded from the sky; it bounces off the water and the mammoth rocks on the shore; it drips from leaves and rooftops. I walk for miles at a time in this beautiful place, beside the ocean and up into the hills. Walking is my meditation. I am no good at sitting still and focusing on my breath. Movement is my best access to that trance state.

Not long ago, though, I did slip into meditation while sitting still. I was perched beside the water, and this time it was the ceaseless motion of the waves that drew me in, instead of the energies of my own body. I never even noticed; I simply found myself perceiving like a newborn, without language or intentional thought. Everything—light, color, creatures, sound, and motion—formed a fluid oneness, I think because I named not one component of the scene. For a writer to somehow turn off the naming part of the brain, from which follows instantly an organizing, separating, and then reintegrating effort, is a splendid accident, and always an inestimable gift, for I can call upon it even if I can’t reproduce it at will.

Other writers may have no such longing for this boundary-less and occasionally wordless state. It’s one I have drifted into at moments throughout my life, and I always come away with new insights or connections. But it has its costs. I sense that it’s connected to the years of pinballing, in which I impulsively but unconsciously avoided structure of any kind. It might explain why I never took creative writing classes or aimed for an MFA or read books on craft or joined writing groups. Too many words, too much thinking, perhaps, when apparently I was after something else.

I finally did read some books on craft, after Every Last Cuckoo came out. The one I remember most is Robert Olen Butler’s From Where You Dream, because in it he talks about the central necessity of the dream state to the creation of fiction. He says early on, “There is no intellect in this world powerful enough to create a great work of novelistic art. Only the unconscious can fit together the stuff of fiction; the conscious mind cannot.” Later, he says, “Your ambition as an artist is to give voice to the deep, inchoate vision of the world that resides dynamically in your unconscious.”

I love this; it dovetails with my experience by the water, and with other moments when I have found myself in trance or at the receiving end of those lightning flashes. I can only arrive at that state by indirection. I have to come at it sideways, like any other truth, because it does not happen by intention. In that, I agree with Butler completely and am grateful to him for opening my eyes to how much of Cuckoo came from my conscious (and self-conscious) mind, but also how much of it really did arise from the dream state.

Where I part company with Butler is over his insistence that no fiction writing at all should come from “the head,” the conscious, organizing, plotting mind. That part, with its technical concerns, is useful only when the writing is done. It is allowed no ongoing interplay with the act of creation. To be so dictatorial about fluidity and the elusive lightning flashes in the dark—this seems contradictory.

Given my sense that the boundaries within us are illusory, I can only feel that Butler is wrong in setting them up so rigidly. Wrong for me, at least, because I am aware of a free and natural exchange between left and right, fiction and life. Had I trusted this awareness many years ago, I might have been able to write much earlier. Instead, I have done something else worthwhile, which is to form habits of mind and psyche that now I can rely on in my work. I’ve looked for patterns in the accidents of my life and lessons in the pinballing. I’ve listened for messages from my own DNA, teasing out the kinds of ideas and situations that mean something to me, that resonate all the way down my bones to my genes, no doubt passed on my some long-dead ancestor whose name I will never know.

Interviewers and others ask where my ideas come from. The truest answer is that they come from accident and randomness, from my own past and all the generations that gave rise to me, my particular and not well-organized self. They come from living on this planet among all its species and geographies. They come from looking at paradox everywhere and learning to love it, to take pleasure in the mysteries and complexities and the fact that there are no blacks and whites, no opposites, no coincidences, and no reality that is not fiction or fiction that is not real.

I guess that’s why pathways paved by others don’t work for me—not Butler’s, not anyone’s, because my own, regardless of its fissures, bumps, and sidetracks, brings me as close to my “deep, inchoate vision of the world” as I can possibly get. This is where I wish to live.
Posted by Aggie at 7:00 AM