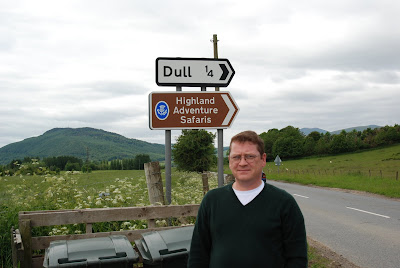 Hi, Everyone! My friend Aggie at Kepler’s asked me to try my hand at blogging, which I’ve actually never done before. I’m here to talk about my new novel, Await Your Reply, which is coming out at the end of August. It’s a funny-sad-spooky book which takes place in the world of identity theft and scams, and which focuses on three different sets of characters whose stories begin to intertwine as you go along.

To some extent, this book is a stylistic departure for me. I started out as a short story writer, and my first two books are collections. My first novel, You Remind Me of Me, was somewhat introspective and meditative, a story of adoption and brotherhood and missed connections. On the other hand, this new book is intentionally meant to be a page-turner, a thriller, that keeps the reader guessing. 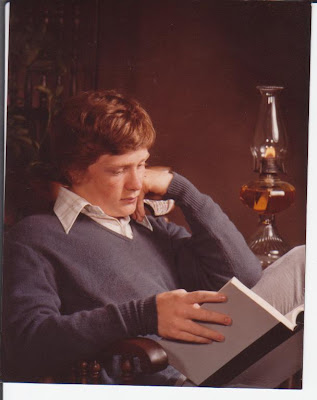 Dan, circa 1982, engrossed in Peter Straub's novel "Ghost Story." Yes, this was actually his "senior photo" for the High School Yearbook.

The truth is that I’ve always been a fan of the thriller genre, and in fact it was one of my first loves as a young reader. The big books for me, as a kid, were works of dark fantasy like Ray Bradbury’s short story collection The October Country and Shirley Jackson’s novel The Haunting of Hill House. I loved books with twists, like Ira Levin’s A Kiss Before Dying and books with breathless plots and complex, deeply-rooted mythology, like Stephen King’s Salem’s Lot and Peter Stroub’s Ghost Story and the fiction of H.P. Lovecraft.

When I started writing this book, I knew that I had such books in mind, though I didn’t exactly know what the plot was going to be. The early drafts had a lot of pastiche.

I named my main characters, Hayden and Miles, after the twins Holland and Niles in Thomas Tryon’s wonderful horror novel, The Other; I drew on Robert Bloch’s grim motel from Psycho, and Daphne Du Maurier’s West Country Estate, Manderley, from Rebecca, and I had the image of a severed hand at rest in an ice cooler which I think must come from some outside source, but it seemed like it appeared in a dream.

In any case, I started out with all of this iconographic imagery, which I knew I wanted to write about. I wanted to pay homage to all of these stories that had been crowding my consciousness since I was a kid, but I didn’t know what to do with the material.

And so I had to start over, to go back and begin to place real, ordinary people, people that I recognized, into this fantastical garden of imagery. It was then that book began to gel for me. I saw the way that I could connect my love of the thrillers I loved as a kid and the more introspective, character-based work that I’d come to admire as I grew older—stuff by Alice Munro, William Trevor, John Cheever, Raymond Carver and so on.

In literary circles, there has been a lot of debate in recent years about how to define the terms “genre” fiction and “literary” fiction. Writing this book has made me more confused about the definition than ever. I’d like to think I’ve written a “literary” book, but I’d be proud if someone called it a “thriller” or a “mystery” or a work of “dark fantasy,” as well—particularly since I feel like the authors who have often been labeled as “genre” are really at the root of my genealogical tree as a writer—my secret family, whether they would recognize me or not. As I’m girding myself for the upcoming reviews, I’m curious to know what people will say.
Posted by Aggie at 6:00 AM