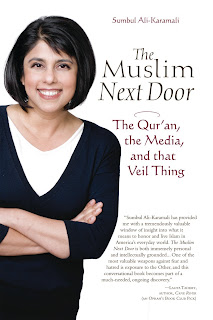 I first met Aggie at one of the events Kepler’s held for me last year, when my book, The Muslim Next Door: the Qur’an, the Media, and that Veil Thing was first published. Shortly afterwards, while we both wrestled with unexpected formatting obstacles on my first Well-Read Donkey Blog Post, Aggie and I instead diverged into the much more pleasing subject of books we read for pleasure. We found our tastes to be wholly divergent when it came to pleasure reading, which itself struck us as so humorous (given our instant rapport) that we talked late into the night, laughing at our own dubious literary jokes, and without regard to the lateness of the hour. What better beginning to a blog?

Books that qualify for my bedside table (as opposed to those that qualify for my study) are, simply, escapist books that don’t leave me feeling depressed and hopeless. I must hasten to add that my definition of “escapist pleasure reads” does not refer to books devoid of riveting writing or labyrinthine plots or incisive character development. It does refer to books that conspicuously lack gratuitous death, destruction, and tragedy – literary devices that I can no longer stomach.

Why so squeamish? Well, the news these days is already replete with enough horror and invective to quench the hopes of even hardened optimists. And since I have been blessed with children to raise, I find I worry enough about them that I shrink from also having to worry about the characters in my pleasure reads. But most of all, I read feel-good books at night because of the work I do during the day.

These days, I am the author of a book on what Muslims believe and practice, as well as a public speaker and commentator on that same subject (having, in addition to my undergraduate English degree and law degree, a graduate degree in Islamic law). This means that I read a lot of Very Serious Factual Nonfiction with titles like Islamic Finance in the Global Economy and The Great Theft: Wrestling Islam from the Extremists (two excellent books, incidentally). If my bedside table supported these sorts of virtuous titles, however, I would have night-long nightmares about wrestling extremists entering into shari’a-compliant general partnership agreements. Or something like that.

Authoring a book on Islam, however readable and full of memoir-like reminiscences it may be, means that I am often a magnet for all the anger, fear, prejudice, and hatred that some of my fellow Americans harbor with respect to my religion. A Gallup poll recently found that a majority of Americans view Muslims negatively and that over half of Americans think that American Muslims cannot be loyal to the United States. I find this statistic deeply shocking and very disturbing. Although I try to bring a light-heartedness and humor to both my writing and my talks, building bridges between Muslims and non-Muslims is a stressful field to inhabit these days.

Is it any surprise that, in my spare time, I don’t wish to read books riddled with death and destruction, xenophobia and bigotry? I want to read stories that inspire hope, not devastate it. I want to read about epiphanies, if I can, and optimism. I want to read love stories, rather than hate stories, folded into plots ensconced in beautiful writing instead of in videogame-like, action-oriented sentence fragments. I want old-fashioned grammar. I want to smile, even laugh perhaps, at our human attempts to become what we can be, not weep over what we are.

So when Aggie asked me to write about my feel-good pleasure reading, I couldn’t resist. Here they are then, in the next two blog installments this week: a few of my favorite mysteries, historical novels, romantic comedies, and social satires. All have literary merit, and all qualify for my bedside table.

If you prefer depressing books that delve into the Stygian depths of the human psyche, you might be disappointed in my choices – or you might not. Does profoundly plumbing the human condition require a descent into depression? Tune into Wednesday’s blog to find out!
Posted by Aggie at 6:00 AM