Kepler's and Me: A Lifelong Romance by Keith Raffel

I want to tell you about a lifelong romance. You see, Kepler’s Books and Magazines and I go way back. I remember being a young boy and trying to figure out how the store was organized when it was in a ramshackle series of connected buildings on the 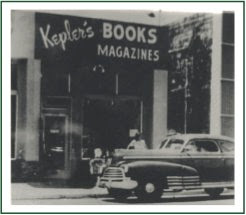 west side of El Camino. (The picture on the left isn’t the store I remember. It's even a little before my time. Maybe I’m talking about its next venue.) The shelves, which slanted every which way, were gorged with paperbacks affordable even to a boy who had only change in his pockets.

I’ve lived in Palo Alto almost my whole life. Two highlights of growing up here were watching the Giants of Willie Mays and spending hours hanging out at terrific independent bookstores. Does anybody remember the Guild Bookstore in Menlo Park? I returned one of the countless dictionaries I received for my Bar Mitzvah there and received a credit I hoarded for months. The Peninsula Bookstore in Town and Country was where I rushed to get the newest Willard Price book (Lion Adventure, Volcano Adventure, South Sea Adventure, etc.) that my brother and I adored. A real old-time favorite was Shirley Cobb Books on University Avenue. (Kind of says something about the upward spiral of evolution that a racist ballplayer would have a bookselling daughter.) Once I reached adulthood, they allowed me to open an “account” there. That meant I just signed my name and paid nothing for books – at least until the monthly statement arrived. Can you imagine how that inflamed the addictive tendencies in a bookaholic like me? (Might as well have pushed no money down and low interest mortgages to people who couldn’t afford to pay them back. Wait, we did that and know how that turned out.) I remember buying a book in the C.P. Snow’s Strangers and Brothers series and being challenged by a bookseller on my choice. For twenty minutes we argued over Snow’s place in the literary pantheon. I can see the book on a shelf in my office as I type this.

What made all these stores distinctive is that they were staffed by fellow book-lovers. They could advocate their favorites books, argue with you over your choices, and learn your own likes and dislikes and make spot-on recommendations. When one of those booksellers said, “I think you’ll like this one,” you took out your wallet.

Of course, what the Guild Bookstore, Peninsula Books, and Shirley Cobb Books have in common now is that they are all only memories. Pfft. Disappeared. In more recent years Heintzelman’s, A Clean Well-Lighted Place for Books, Stacey’s, Printer’s Inc, and Bob and Bob have all vanished as well. The most obvious thing that differentiates Kepler’s from those stores of yore is that it’s still here. Perhaps that’s the most remarkable feature of the Kepler’s story. Its triumph is in its survival. Remember the lyrics from the Sondheim song? “Good times and bum times, I've seen 'em all. And, my dear, I'm still here.” And Kepler's is still here because it is a booklover's Nirvana.

I have those fond memories of Kepler’s from my childhood, and I know my children will, too. There’s nothing the kids love more than a trip to Kepler’s combined with a nosh at Café Borrone next door. My 10-year old son received a lesson in what makes Kepler’s great just last week. As usual, he was looking for a book to read. (I’m waiting for the scientists to discover which gene transmits bibliophilia down the generations.) I pretty much insisted that he ask a bookseller for recommendations. Angela listened patiently as he told her that he liked D.J. MacHale, Anthony Horowitz, Rick Riordan, John Flanagan, R.A. Salvatore, and Jim Rollins. (He and I have heard the first four speak at Kepler's.) She immediately suggested Gone by Michael Grant. My son told me this morning it might be his favorite book ever – high praise from a boy who goes through three or four books a week. What other bookstore is going to give you that? Kepler’s is a lifelong romance for me and one being passed along to the next generation. Bravo.

In my books I try to give a sense of what life in Silicon Valley is like for someone like me. And Kepler's is an integral part of my life here. No surprise then that Kepler’s itself makes a cameo appearance in Dot Dead, my first book.

No surprise either on where I’m kicking off my book tour for my second book. Where else but a store I loved as a boy, a store my children love, a store staffed by booklovers? So I’ll be at Kepler’s on October 20 at 7.30 talking about Smasher: A Silicon Valley Thriller.

I’ll post again on Wednesday. Thanks, Keith.
Posted by Keith Raffel at 8:38 AM